Review: The Songs of Jesse Adams by Peter McKinnon

It's the last week of the year, so I'm burying the reviews of the books I didn't manage to finish in 2014 in the hope that you are all too busy recovering from Christmas to notice. 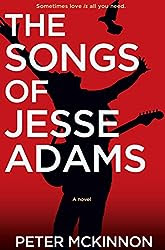 I’m not sure what to think about The Songs of Jesse Adams. It has more of a literary feel than most of the books I read. I can see the story had merits and some of the writing was excellent. It just didn’t resonate with me. I found it hard to get in to (I had to start it twice), and I gave up at around the halfway point because I found I was reading the words and missing the meaning.

I remember, years ago, reading The Whale Rider by Witi Ihimaera, and really enjoying it. I was living in London at the time, and the setting of The Whale Rider was close to where I’d grown up, and it reminded me of my childhood years and school camps down the coast. But I loaned the book to an older man from work, and he returned it, unread, saying the Maori language and setting made it too hard to get in to. He had a PhD, yet found a young adult novel hard to read? Maybe I’m suffering from the same problem with Jesse Adams and his story.

The Songs of Jesse Adams is set in Melbourne, Australia, in the late 1960’s, a unique setting in both time and place. The physical setting was done well, as was the cultural setting, with the use of Australian slang (it seems Australian slang of the 1960’s was similar to the New Zealand slang I grew up with in the 1970’s). But it took me a while to work out exactly when it was set—Woodstock was the major clue, because I didn’t know enough Australian history to be able to pick the date from the information given (hint for authors: you can introduce a book with the time and place, e.g. “Melbourne, Australia, 1967”. It’s a valuable clue for any novel not set in the present).

However, it wasn’t just the timing and the cultural aspects which made the writing seem awkward. It was the way the point of view kept shifting from character to character (most annoyingly, to minor characters), and the “he thought” and “she thought” attributions which made the writing seem distant. This meant I never really got the feeling of knowing any of the characters, and I find it hard to like a novel where I have no emotional attachment—positive or negative—to any of the characters, not even Jesse Adams.

I’m not a fan of allegory in general, because I find the necessity to keep to a predetermined theme or plot line can force the characters to say and do things that don’t actually fit their character. I didn’t find The Songs of Jesse Adams had this problem, partly because none of the characters were sufficiently developed to be manipulated out of character. The greater problem was the sheer number of characters: I identified Jesus (Jesse Adams), twelve disciples, Mary the mother of Jesus (Anne), Mary Magdalene (Annie), the Roman rulers, the Pharisees, and there were probably others. Realising the allegorical connection also meant I was looking to see the links between the stories of Jesus and Jesse rather than focusing on the story.

I’d heard good things about The Songs of Jesse Adams, and I wanted to like it. But I didn’t, to the point where I didn’t care enough to finish it.

Thanks to Acorn Press for providing a free ebook for review.
Posted by Iola at 09:00