An American heiress and a crown prince seem destined to be together. Will the devastation of war keep them apart forever? Find out in Rachel Hauck's new book, How to Catch a Prince. True love has a destiny all its own. With a little heavenly help, Prince Stephen and Corina embark on a journey of truth. But when the secrets are revealed, can they overcome, move forward, and find love again?

One grand prize winner will receive:
Enter today by clicking the icon below. But hurry, the giveaway ends on March 23rd. Winner will be announced March 24th on Rachel's blog. 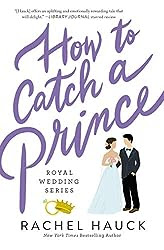 American heiress Corina Del Ray has spent the last five years mourning the loss of her twin brother, Carlos, in Afghanistan. Now she’s working for online megapaper, the Beaumont News, and her boss assigns her to go to the kingdom of Brighton to attend a movie premier and interview the lead actor. She doesn’t want to go—she has history in Brighton, and with Prince Stephen …

I wanted to like How to Catch a Prince. After all, I read for enjoyment. However, I had two major issues. First, and most important, I simply couldn’t get into the imaginary kingdom the author has created. It’s not England, but has too many similarities with England to ignore—some of which make no sense, like the fact they play rugby, a game which wasn’t invented until 200 years after their independence from England. Why don’t they play Brightonian football?

There is a king who married a commoner (Wills and Kate, anyone?), a prince who spent time in the army (Harry?) and now plays rugby for his country (which sounds a lot like Zara’s husband. You know, Zara, Prince William's cousin?). Everyone in America seems to have visited or lived in Brighton at some points. Even the name Brighton is irritating, as it continually reminded me of the famous town on England’s south coast. And then there were the slightly magical elements, like the hotel only the hero and heroine could see.

My other issue was the language glitches. A movie premier. A prince being coronated. The King’s mother being called the Queen Mum. Bugger (we’re not allowed to use the f-word in Christian fiction, so why is the homosexual equivalent appropriate?). Every time I came close to becoming engrossed in the story, something would pull me out and remind me that it was all made up, an allegory.

The writing was okay. The characters were okay. The plot was okay. The Christian elements of the plot were, on average, okay (they ranged from being almost absent to too heavy-handed). But there were too many things pulling me out of the story, and “okay” wasn’t enough to overcome those issues. Overall, I had to force myself to finish How to Catch a Prince.

Thanks to Litfuse and Zondervan for providing a free ebook for review. You can find out more about the book and Rachel Hauck at the tour landing page.
Posted by Iola at 09:00