Review: Together with You by Victoria Bylin 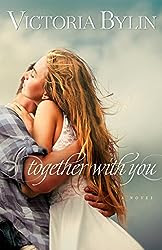 Ophthalmologist Dr Ryan Tremaine has a problem. Not only has he promised his ex-wife that he’ll look after their two sons for the summer while she’s on a short-term missions trip, but he’s also recently taken custody of Penny, his five-year-old daughter from the affair that ended his marriage. And Penny is a problem: she has FASD, Fetal Alcohol Spectrum Disorder, and her behaviour has already run off three nannies.

Carly Jo Mason is working at the Animal Factory while completing a PhD specialising in the prevention of FASD. A chance meeting with Penny and Ryan leads to a job offer: as Penny’s new nanny. Carly is initially reluctant to get involved because of her own personal history of working with FASD children, but is persuaded to take the job … and ends up more involved than even she had anticipated.

I thoroughly enjoyed Until I Found You, Victoria Bylin’s first contemporary novel for Bethany House, and I enjoyed Together With You even more. The plot, driven largely by Penny’s issues as a special needs child, was a unique combination of entertaining and educational. I also liked the way the Christian elements of the plot were dealt with, particularly the conflict between Carly and Ryan, and the sympathetic and non-judgemental way FASD was dealt with.

The characters were excellent, and it was good to see the stuffy and barely competent Dr Tremaine loosen up a bit as the plot progressed. The minor characters were also excellent, even Penny’s Aunt Denise, who wants to have custody of Penny for herself. It’s clever writing when the viewpoint character dislikes another character, yet the writing manages to get across a degree of sympathy for that ‘unlikable’ character.

One word of warning: if the cover puts you off because it’s a little too cliché romance, think again. While Together With You definitely has a strong romance plot, it’s just as much a story about the consequences of bad choices, the difficulties in raising a child with special needs, and truly understanding God’s forgiveness. Recommended.

Thanks to Bethany House and NetGalley for providing a free ebook for review. You can find out more about Victoria Bylin at her website.
Posted by Iola at 09:00