Review: After a Fashion by Jen Turano 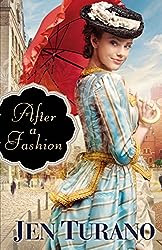 Miss Harriet Peabody is a ladies’ hatmaker in New York City in 1882. An out-of-the-ordinary request from her employer to deliver some hats to an important customer sparks a chain of events which finds Harriet as the hired companion of Mr Oliver Addleshaw, one of the wealthiest gentlemen in America. Harriet had asked God for “something wonderful” for her birthday, but surely He didn’t mean this? Sure, Mr Addleshaw is attractive, but he has some questionable views and associates with some inappropriate people.

Oddly enough, Oliver Addleshaw has the same complaints about Harriet: she is impulsive, knows all the wrong people, and has some quite inappropriate skills. But he needs a lady to act as companion when he meets with the Duke of Westmoore in regard to a business deal, and the previous candidate simply won’t do. Harriet is his only option.

I’m a big fan of Jen Turano’s writing. Her characters are intelligent, quirky, and funny, yet it never seems as though that’s the effect she’s trying to achieve (I recently attempted to read a title where I suspect the author was trying to be funny, but missed the mark and hit cringe-worthy instead. At least I hope she was trying to be funny. The alternative is too horrible to contemplate).

Jen Turano manages to infuse her writing with amusing quips (such as describing one character as having an “overabundance of personality”) without being cringey. And the over-the-top ridiculous situations her characters routinely get themselves into are well-paced comedy, not slapstick. After a Fashion is the first book in a new series, and is recommended for fans of Carol Cox and Karen Witemeyer.

Thanks to Bethany House and NetGalley for providing a free ebook for review. You can find out more about Jen Turano at her website.

This book is part of my 2015 Reading Challenge, as a book by an author I love that I haven't read yet (well, I have now!).