Review and Giveaway: A Love Like Ours by Becky Wade

Fall in love with Becky Wade's new book, A Love Like Ours, a story of healing, romance, and cowboys. A glimmer of the hope Jake thought he’d lost returns when Lyndie lands back in Texas, but fears and regrets still plague him. Will Jake ever be able to love Lyndie like she deserves, or is his heart too shattered to mend?

To celebrate the release of her new book, Becky is giving away a $100 cash card and a book-inspired prize pack!

One grand prize winner will receive:

Enter today by clicking the icon below. But hurry, the giveaway ends on May 26th. Winner will be announced May 27th on Becky's site. 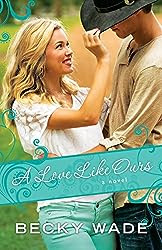 A Love Like Ours is the third in the Porter Family series, and is Jake’s story. Jake had a cameo in the previous novel in the series, and struck me as a fascinating character even then, a tortured soul suffering from PTSD following his Marine service in Afghanistan who now trains Thoroughbred horses on the family ranch.

His childhood friend Lyndie James has recently moved back to Whispering Springs, and wants a job on the ranch as an exercise trainer. She finds Jake wounded, but there’s still the connection between them there was two decades ago, the last time they met. But will Jake let her in?

I thought Lyndie was an excellent character, a fascinating mix of horse-mad jockey, imaginative author-artist, and a woman of deep Christian faith. She had a quirky way of looking at the world—and Jake, who she described as Mr Tall, Dark and Brooding, a description which characterised him well.

Jake was a harder character to get to know, but that was part of his character: his PTSD and survivor guilt holds him back from opening up from others, which means he’s a more remote character than most fictional heroes in romance. But the tortured hero has an appeal, not least to the woman—Lyndie—who wants to ‘fix’ him. There is also the appeal of a couple reunited after years apart yet still connected in some undefinable way, a reminder that true love is unconditional and never-ending.

There were a two things about A Love Like Ours which bugged me. One was the way characters kept stating and interrupting each other (she stated, he interrupted) etc. It felt odd. The other was the secondary will-they-won’t-they romance with Lyndie’s neighbour, Amber (who series fans might remember from the earlier books in the series, Undeniably Yours and Meant to Be Mine). It wasn’t that I didn’t like seeing Amber again, more than it detracted from Lyndie’s developing relationship with Jake, which is what I wanted to see.

Despite these minor glitches, I thoroughly enjoyed A Love Like Ours. Lyndie and Jake are special and unique characters, and while I almost thought they weren’t going to make it, I need not have worried. It was a definite “awww” ending, with plenty of wonderful kisses in as well.

Thanks to Litfuse and NetGalley for providing a free ebook for review. You can find out more about Becky Wade at Litfuse Publicity, or at Becky's website.
Posted by Iola at 09:00