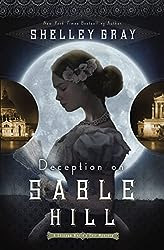 Shelley Gray is more commonly known as Shelley Shepherd Gray, bestselling author of Amish fiction. I haven’t read any of her Amish fiction, but I think I’ve read the three contemporary romantic suspense novels she’s published as Shelley Gray, and they are excellent. Excellent writing, strong characters, and hard-hitting plots touching on some major contemporary issues.

Deception on Sable Hill is, as far as I can tell, Gray’s second historical novel, following Secrets of Sloane House. It’s part of her series set in Chicago during the 1893 World’s Fair, although the Fair isn’t a major feature. Anyway, Sable Hill is the exclusive part of town, although Miss Eloisa Carstairs has found out that exclusive doesn’t necessarily mean safe ...

In hindsight, Deception on Sable Hill shouldn’t have worked. While it’s entirely believable that Mrs Carstairs was so self-absorbed that she didn’t notice the anguish Eloisa was going through, it’s much less likely that she didn’t notice Eloisa spending far too much time with that police detective. It would be unusual for a lady of Eloisa Carstairs’s station to spend time with an Irish police detective under normal circumstances … but this is a novel, and Eloisa’s circumstances are hardly normal.

Maybe it shouldn’t have worked, but it did, and that’s a testament to Shelley Gray’s consistently excellent characterisation and strong writing, Even if logic says the plot shouldn’t work, Gray managed to convince me it did, and I was swept up in a romantic suspense novel set against the backdrop of the 1893 Chicago World’s Fair (a popular topic, it seems: Deeanne Gist is also writing a series set in and around the Fair).

Thanks to Zondervan and NetGalley for providing a free ebook for review. You can find out more about Shelley Gray at her website.