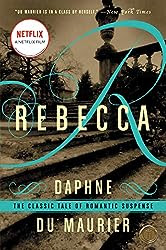 This review is a slight cheat in two respects: it was my grandmother’s favourite book when the challenge called for my mother’s, and it was an audiobook—a twelve-CD version that belonged to my grandmother (that’s over fourteen hours of playing time, which took me about three weeks to get through, in a series of three-hour car journeys).

The quality of the audiobook was excellent. The narrator, Anna Massey, made each character come alive: from the naïve nameless narrator, Maxim and his boisterous sister, the shy maids and the distant Mrs Danvers, to the local characters including the intellectually challenged Ben. Each character had their own distinct voice, and it all sounded effortless and not at all contrived (unlike some narrators).

But I didn’t especially enjoy the book, despite its enduring popularity and famous first (and last) lines.


“Last night I dreamt I went to Manderley again …”.

It took me a good while to work out Manderley was a house in southern England—Devon or Cornwall, perhaps—not somewhere in India. I also couldn’t work out when the book was set (and still haven’t). I assume it was a contemporary novel when it was published (although Daphne du Maurier wrote contemporary and historical fiction, so that’s not clear). It’s obvious some years have passed since the events Mrs de Winter is telling us about, but I never knew how many years had passed, or what year—what decade, even—she was writing about. Perhaps Grandma could have told me.

Rebecca is told entirely in the first person, from the viewpoint of the unnamed second Mrs de Winter, and I found the fact she went nameless throughout the entire novel to be an unnecessary affectation. I found it odd that despite being the narrator, she told us little about herself prior to meeting the famed widower, Max de Winter of Manderley. Perhaps the author felt it wasn’t necessary to show us what happened to make Mrs de Winter the shy orphan she was, but I would have liked to have known, partly because I never understood what Maxim saw in her, except that she was nothing like Rebecca.

I found her unbearably naïve, although that’s perhaps a function of her young age (about twenty), and the fact Rebecca is set in a time before television, let alone the internet. Mrs de Winter simply hadn’t had much exposure to life. I found that annoying, but not as much as her habit of imagining future conversations or events, as I was never sure whether the past Mrs de Winter was indulging in teenage flights of fancy, or if the future Mrs de Winter was telling us what had really happened. Yes, it was an interesting literary device and I can see why people rave about du Maurier's writing, but it was a device which annoyed me.

I did get annoyed by the constant “he said/she said/I said” dialogue tags. In fairness, these might not have worried me as much if I had read the book rather than listened to it—Anna Massey did such a good job of using different voices for the different characters that she made the dialogue tags quite redundant.

But the main thing which annoyed me was how slow the book was (and, yes, it was probably made even slower by listening to it, because I couldn’t skip ahead through the endless introspection to the next part where something was actually happening in real time). There was a big “oh, no” moment just after halfway, but that had been telegraphed in flashing lights which rather destroyed the impact (while I have read the book before, decades ago, I’d forgotten that particular plot point). I had vaguely remembered the other major plot point and the final climax, but they still managed to surprise me. The book really didn’t get to the point and pick up pace until around the three-quarter mark.

If I had been reading it, I probably wouldn’t have got past the first chapter. There’s a lesson there: while we can appreciate (or not) the famed writers of past generations, it won’t do to attempt to imitate their style or structure. What was original and compelling when Rebecca was written is no longer new, and may no longer be compelling.
Posted by Iola at 09:00