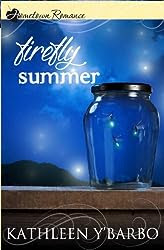 This is the third Kathleen Y’Barbo book I’ve read, and it’s taken me a while to try again after I didn’t enjoy the first two. One was the last book in a series, which made it harder to pick up. The other was the first book in a series, but I didn’t like it because the back cover copy gave away two major plot points within the book, and I found it difficult to engage with parts of the plot. They felt a little ‘off’ to me (I later found out it was badly-marketed—it wasn’t historical romance, as I’d thought, but steampunk, which explained those aspects I felt were ‘off’). I also read hints that Y’Barbo herself hadn’t been pleased with the way the book was marketed, which inspired me to try her writing again. She’s now changed publisher and moved to contemporary fiction, a move which can only be for the better given her previous publishers substandard effort on the earlier book.

What about Firefly Summer?

The story starts shortly after Sessa Lee Chambers’s husband dies, leaving her distraught and with a five-year-old son to raise alone. It then moves forward in time by a couple of decades to mature Sessa, who now has a successful business restoring wooden carousel horses, a dream she’d shared with her husband. But life takes a few unexpected turns and she finds herself caring for her infant granddaughter … and befriending the man who killed her son.

Sessa is a fabulous character. She’s gone from the so-distraught-she’s-good-for-nothing widow to the strong woman with a healthy social life and thriving business. It’s also good to see a character who’s had a less-than-perfect life: her son rejected his Christian upbringing and his mother, which is something Sessa blames herself for. That’s rare in Christian romance, probably because most novels don’t feature characters old enough to have adult children, or grandchildren. It was especially good to see a romance featuring a mature couple—a reminder that romance isn’t just for the young.

Both Sessa and Trey had issues with the perceived and actual sins in their past, and with forgiveness for both themselves and each other. This aspect of the plot had the potential to be awkward and cringe-inducing, but Y’Barbo’s writing prowess shone through and it was excellent. The one thing missing was tying up the loose end about the red cowboy hat (you’ll have to read it to know what I mean).

Overall, an excellent novel and I’ll look forward to reading more from Kathleen Y’Barbo in the future.

Thanks to Redbud Press for providing a free ebook for review.
Posted by Iola at 09:00