Review: Daughter of the Regiment by Stephanie Grace Whitson 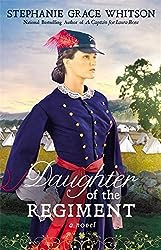 I’m always impressed by Stephanie Grace Whitson’s books, by her writing, by her characters, by her historical accuracy, and by the way she manages to weave those things together to always produce a novel worth reading. I admit, Daughter of the Regiment wasn’t the easiest novel to get in to, at least for me.

It’s set in Missouri, and I’m not American so I had no idea where it was. It appeared to be in the South but it wasn’t a state that’s featured in other fiction I’ve read about the War Between the States (it’s really more West than true South, which might explain my confusion). And I was initially confused about which side was which—I’m used to North and South, not Confederate and Union (I read this before the recent fracas about removing the Confederate flag from whichever building it was on. I’ll know for next time. Confederate is South).

Anyway, it’s the early days of what later becomes known as the Civil War, the War of Northern Aggression or the War Between the States (depending on where you live and, I suspect, how old you are). Maggie Malone is left alone on the family farm in Little Dixie, Missouri, after her two younger brothers go off to fight for the Union. She goes off to search for them after raiders destroy the farm and she realises the local sheriff—a Confederate supporter—isn’t exactly proactive about rounding up the miscreants.

Maggie manages to make a place for herself in the regiment, and what follows is a fascinating insight into a different side of army life. There’s also an unlikely friendship with a planation belle, a love interest, and a subplot which addresses deeper issues of faith, love and family. The writing is excellent, and I very much enjoyed the story. Recommended for fans of historical fiction.

Thanks to NetGalley for providing a free ebook for review.