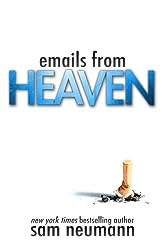 David Grasso has gotten an email from no one. He knows this is impossible, but with a blank “sender” field and no other identifying marks, he’s left incapable of tracing the source. The email claims to be from his brother, but David knows it can’t be, because his brother is dead.

Upon reading the body text he becomes furious, not at the obvious attempt at deceit, but at what the email says. Furious someone would use his brother’s name to perpetuate a lie. Furious the lie existed at all.

EMAILS FROM HEAVEN is a novel following David Grasso’s struggle to make sense of the email and those that followed. As a graphic designer at a high-powered ad firm in downtown Chicago, David spends most of his waking hours at the office. He’s unmarried, has few friends, and his coworkers bore him. His life is a monotonous running clock. But when the email arrives, his world is turned on end, and he will go to any length to reveal the source and explain the seemingly inconceivable circumstances that led to it showing up in his inbox.

This is the story of one man’s struggle with mystery, death, and the idea of faith. When logic is suspended, all that remains is one timeless question:


Not What I Was Expecting


Most of Emails from Heaven is told from the point of view of David Grasso, a graphic designer at the JF&A Integrated Advertising Agency. He’s relatively happy with his work at the beginning of the novel, but gradually becomes more and more disaffected with office life and the petty social hierarchies within.

The initial premise was intriguing: a man receiving emails from his dead brother. The style of the writing was also intriguing, a mix of third person and omniscient which shouldn’t have worked, but somehow fit with the unusual plot. It has to be said the editing was choppy, especially around point of view, and—frankly—plot. It started off as a mystery with a supernatural touch, as David puzzles about the origin of the strange emails and reflects on his relationship with his dead brother.

But it gradually morphed into something different, more like a commentary on modern office life, a cross between The Office and Dilbert. We see David in the office environment, gradually losing interest as he begins to see through the office politics and befriend the office loser.

It’s not to say the story wasn’t good—it was—but it wasn’t the story we’d been promised. The other way it wasn’t as promised was that I thought it was a Christian novel (my blog is Iola’s Christian Reads: I pretty much expect that’s the kind of novel I’m going to be offered to review). But Emails from Heaven wasn’t “Christian” in that it didn’t meet the usual specifications people have for Christian fiction, particularly around the use of swearing, smoking and drinking. There was no sex, but that was more a function of plot and character: David and especially Martin were too reclusive to have lady friends.

But this plot segue means I didn’t think the essential question in the story was answered, and maybe this is my problem, but I like there to be answers. Both parts of the book—the emails from heaven and the struggle against office politics—were good, but they didn’t hang together well enough.

As an aside, the author advertises himself as a New York Times Bestselling Author. I'd never heard of him so I checked: one of his previous books made #23 on the Non-Fiction ebook list for one week, which makes it sound like the kind of boast David Grasso's bombastic manager would make.