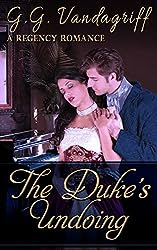 Miss Elise Edwards has just lost her third fiancé. Her first died in the Napoleonic wars, her second turned out to be mad and fled to Italy, and she suspects the most recent of being in love with her best friend—who is most certainly in love with him.

Through a strange set of events and coincidences, she becomes engaged a fourth time: to the Duke of Ruisdell, reputed to be a rake and a rogue. For his part, the Duke used to be a rake but three years fighting in the Peninsula has left him a changed man.

What follows is a typical Regency: lots of Ladies and Lords (some of whom are not ladies or gentlemen), beautiful clothes, misunderstandings, balls, a duel and a madman. No, it’s not realistic, but that’s Regency Romance. “Normal” people never lived like this, even during the Regency—Regency Romance is centred around the ton, the Upper 10,000 members of society, who comprised around 1% of the population.

The Duke's Undoing is a classic Regency Romance in the style of Georgette Heyer, which means it’s free of language, sex and violence, and is faithful to the established facts of the time (as established by Georgette Heyer). The heroine is intelligent with some interesting personality quirks, the hero is heroic and titled, and the supporting characters are excellent.

I did get confused on occasion between George and Gregory, particularly when the men were often identified only by their titles, and I can imagine some readers would get annoyed by the way George speaks, but I enjoyed it-it reminded me of one of the characters out of Cotillion, my favourite Georgette Heyer novel. The Duke's Undoing isn’t Christian fiction (actually the author is a Latter Day Saint, and there is no faith element), but it’s an enjoyable read for fans of traditional Regency Romance. Recommended for fans of Regency Romance.
Posted by Iola at 09:00