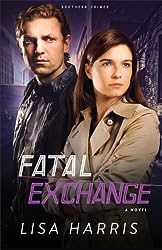 Mason Taylor has had a bad start to his day. His estranged father is dying, but he’s had a desperate phone call from Rafael Cerda, a teen he counsels from the wrong side of the tracks. Rafael’s younger brother has been kidnapped by drug lords, who are asking for a ransom of $250,000, money he can’t possibly find. And things get worse …

Emily Hunt is Rafael’s history teacher at the prestigious Dogwood Academy, where he is a scholarship student, but now she and her niece, Tess, are his hostages. Meanwhile, Mason works with Emily’s sister—Tess’s mother—to negotiate with Rafael before anyone gets hurt. But who is behind the kidnapping?

Fatal Exchange is fast-paced romantic suspense. Most of the action takes place over the course of a single day, and there are no end to the twists and turns as Mason and Emily work to resolve the situation from their different positions. The plot was excellent, and kept me reading.

Along with plenty of suspense, there is a sizzling romantic undertone between a couple who have known each other for years but have never dated because of Emily’s aversion to dating a cop—and because Mason didn’t share her faith. I thought the way their relationship was handled was excellent. And the teaser at the end … I’ll be waiting for the next book with bated breath.

Lisa Harris won the 2014 Christy Award for Contemporary Romance/Suspense for Dangerous Passage, the first book in the Southern Crimes series, and Fatal Exchange is every bit as good, but can easily be read as a stand-alone novel. Recommended for romantic suspense fans.

Thanks to Lisa Harris for the ebook, which I won in a contest hosted by SoulInspirationz. You can find out more about Lisa Harris at her website.
Posted by Iola at 09:00