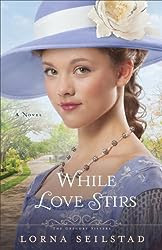 This is the second Lorna Seilstad book I’ve read—the other was her début novel, Making Waves, and I wasn’t overly impressed by it. The writing wasn't bad, but I didn’t like the heroine at all, and I couldn’t stomach the thought of reading further books in the series if she was featured. However, While Love Stirs is part of a new series, so I hoped it would be better.

It was. While Love Stirs is the story of Charlotte Gregory, recent graduate of Fannie Farmer’s School of Cookery. She is seeking employment as a chef (chef = stirs, get it?), but none of the restaurants in St Paul’s are interested in hiring a woman chef. Charlotte is an intelligent if opinionated woman (which puts her streets ahead of the heroine of Making Waves), with feminist tendencies and she doesn’t want to be controlled by any man.

Joel Brooks is a doctor at the local hospital (this was a little confusing. At first he seemed to be on the maternity ward, then he was looking after a woman with suspected cancer, then a stroke patient). Anyway, he has a run-in with Charlotte about the appropriate diet for a new mother (Charlotte’s sister). I didn’t like Joel at first because of his pathological need to have complete control over his environment, and I didn’t see him getting past that (Freud would have a field day with Joel’s OCD). However, but he grew on me as he grew on Charlotte.

This is actually the second book in The Gregory Sisters series. The first was the story of Charlotte’s older sister, attorney Hannah, although you don’t need to read the first in order to understand or enjoy this (I hadn’t). The writing and research was well done (with a couple of unimportant glitches), and I was impressed by the medical knowledge.

The minor characters were well written, and while I found characters like Kathleen and Nurse Pierce rather annoying, that was the point. The one character I didn’t like was Tessa, Charlotte’s younger sister. Tessa was too flighty (partly because she was young, but I didn’t realise how young she was because I haven’t read the first book), and I found her immaturity irritating.

I enjoyed While Love Stirs, but it’s still not a book I’d bother to reread. I also thought the Christian aspects were too understated (perhaps a reaction to the reviews of Making Waves which suggested it was too preachy). All in all, it’s a solid historical Christian romance, but with nothing to make it stand out above all the others in the genre.

Thanks to Revell and NetGalley for providing a free ebook for review. You can find out more about Lorna Seilstad at her website.
Posted by Iola at 09:00