Review: Like a Flower in Bloom by Siri MItchell

Miss Charlotte Withersby is following the family tradition by being an acclaimed botanist, although she does wish she could get published under her own name rather than her father’s name. But life changes when her uncle suggests it’s time she married and her father agrees. She protests, but the unexpected arrival of Mr Edward Trimble, one of her father's correspondents, seals the deal. Charlotte will enter local society in search of a husband, and Mr Trimble will take over her duties. Charlotte agrees only because she believes her father will soon find Mr Trimble lacking, but her plans soon go awry.

Charlotte is one of those people with academic intelligence, but not a lot of understanding of the subtleties of human nature (she’s the Victorian equivalent of Amy Farrah Fowler from The Big Bang Theory). This makes for interesting reading, as Like a Flower in Bloom is written entirely in first person from Charlotte’s point of view, yet the underlying subtext made me, as the reader, suspect things which Charlotte had no idea about (and I was right). That’s exceptional writing.

I also found the minor characters fascinating, from the young lady determined not to marry to the widowed minister (a father of six), and the enigmatic Mr Trimble, who unintentionally takes Charlotte's life purpose away from her at the same time as displaying an uncommon knowledge of female dress and manners.

Overall, I really enjoyed Like a Flower in Bloom. I was ambivalent about Siri Mitchell’s last novel, because it seemed to be missing the “Christian” aspect of Christian fiction. Like a Flower in Bloom is much better in that respect, and while it had a slow start (too much character history and not enough present action—well, 1852 action, given it’s historical romance), it improved quickly once we had been introduced to all the main characters. 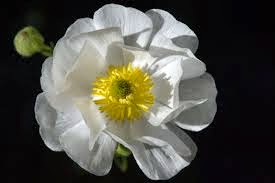 There were a couple of language glitches at the beginning, but I didn’t notice any once I got into the story, because the characters captured my attention so much. It's obvious a lot of research went in to the writing of Like a Flower in Bloom, but this never detracted from the story (and, frankly, was easy to gloss over without losing the essence of the plot. I'm not a plant person, and the only plant reference I really understood was New Zealand's Mount Cook Lily ... and I've no idea how that would have looked after a sea voyage halfway around the world).


Recommended for fans of historical fiction.

Thanks to Bethany House and NetGalley for providing a free ebook for review. You can find out more about Siri Mitchell at her website.
Posted by Iola at 09:00