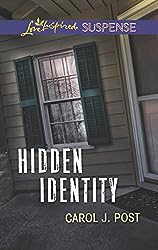 I’m always a fan of a good romantic suspense story, and this one ticks all the boxes: intelligent heroine with a secret, handsome and godly cop, and more twists than I usually find in a full-length novel, let alone a shorter Love Inspired Suspense. Even better, I didn’t see the twists coming …

Meagan Berry faked her own death and moved to Cedar Key, Florida, to escape her ex-fiancé. But then her face makes the news after she rescues a man from a plane crashed in the water … a man who turns out to be a senator. Now strange things are happening, she’s convinced her ex is here to get her, and she doesn’t want to end up like his last fiancé.

Police Office Hunter Kingston is attracted to the town’s pretty new resident, but he’s soon convinced she’s hiding something (duh). And she’s not a Christian. But that doesn’t stop him wanting to protect her … especially when it seems someone is after her.

Meagan and Hunter were both excellent characters. Hunter’s only problem was that he was perhaps too larger than life, too perfect, but that fault is easy to forgive in a romance novel. Meagan was a more complex character as we didn’t find her secrets all out at once, which added to the tension. She had plenty of struggles, both personal and spiritual – growing up surrounded by abusive men meant she found it hard to trust men at all—even the almost-perfect Hunter—and she found it even harder to trust God. If He's really on her side, why do all the bad things happen?

Anyway, Hunter was the perfect hero for a woman with issues about trusting men and trusting God, and I enjoyed getting to know him and see the way he was able to both keep Meagan safe and show her that not all men were abusive. There was also one powerful scene where he did show himself as less than perfect, and I liked the way that threw even more conflict into his relationship with Meagan.

This is the second book in the Cedar Key series (following Deadly Getaway), but can easily be read as a standalone novel. It sounds like a great location for a holiday, as long as you don't mind all the murderous crazies the town seems to attract!