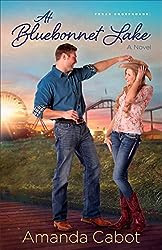 When advertising executive Kate Sherwood and her grandmother, Sally Fuller, arrive at Rainbow’s End resort in the Texas Hill Country, it’s nothing like the beautiful Christian resort her grandmother had described. It’s not even like the brochure’s “faux-tography” (I like that word!). She meets Greg, who she thinks is the resort handyman, but soon finds out he’s another guest. So why is he repairing the cottages? Why is he even at Rainbow’s End?


We find out Greg’s secret background soon enough: he’s a Silicon Valley boy wonder who sold his majority share in an extremely successful software company for an obscene amount of money, and now he’s staying at Rainbow’s End while he works out what God wants him to do with his life. This initially caused me some concern, because the “Career Woman meets Secret Billionaire” concept had the potential to become a cheesy cliché.

Yes, it seemed at first that Kate was the archetype of the driven career woman who resents the fact that she’s being made to spend a month at this run-down resort, at the expense possible of a much-desired promotion. And there was the potential for Greg to be little more than the software nerd he saw himself as, but Kate saw more in him. As a result, what could have been a cheesy romance turned into something more complex as Kate and Greg got to know each other, and subtly challenged each other to rethink their long-held beliefs about career (Kate) and family (Greg).

Thanks to Revell and NetGalley for providing a free ebook for review. You can find out more about Amanda Cabot at her website.
Posted by Iola at 09:00