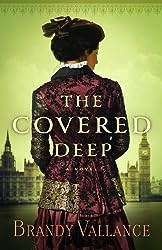 I liked the concept of The Covered Deep: It's set in 1877, and follows a young woman from a small town in Ohio wins a competition to travel to London, and on to the Holy Land. Bianca Marshal is twenty-five, well-read, and holding out for True Love (encouraged by her father). It’s soon apparent to the reader, if not to Bianca, that Sir Adrian Hartwith has selected his travel companions based on their unknown relationships, and this is what provides most of the conflict in the story. He has an ulterior motive, but I thought this didn’t come out until too late in the story.

I had two main problems with The Covered Deep. The first is common to many American authors who use historical English settings and characters: they get the details wrong, to the point where it detracted from the story. Bianca can’t have read Sherlock Holmes, because the first Homes novel wasn’t published until 1887, ten years after the setting of The Covered Deep. English girls wear plaits, not braids, there has been no national flag of Great Britain since 1801 (when it became the flag of the United Kingdom of Great Britain and Ireland), and the British were subjects, not citizens, in 1877. And Bianca’s assumption that Paul Emerson is single because he doesn’t wear a wedding ring is anachronistic: British men only started wearing wedding rings in the 1960’s. Pedantic? Maybe. But these are the details which pull me out of the story.

That’s not to say the writing isn’t good: some lines are brilliant. But parts of the story felt as though the author was trying too hard, often because she used a word in the wrong context (e.g. bee’s knees, which dates from 1922), or used the almost-correct word (e.g. “her acute eyes” or “howbeit” where “albeit” would have been a better choice). This brought to mind a Mark Twain quote:

Although, in hindsight, Madeline referring to herself and Bianca as “women” not “ladies” might have been deliberate …

My second problem was with the character of Bianca, as illustrated by this conversation between Sir Adrian and Madeline:


“Have you ever met anyone so uncultured? So innocent? So naïve?”
“No.”

Bianca is twenty-five, unmarried, and this is the first time she’s ever left her home town. But she’s spent those twenty-five years living with parents who barely like each other, a mother who has continually encouraged her to marry, a father who has encouraged her to hold out for true love, and with books. How could she have read authors like Shakespeare, Austen and the Bronte sisters, and not realised that some people will lie, cheat and scheme in order to get what they want. (Not to mention reading The Bible, which is full of object lessons in what not to do.)

The result is I found it hard to care for Bianca, and harder still to care for any of her travel companions. Finishing The Covered Deep
was a chore, not a pleasure. I liked the concept, and the spiritual applications were excellent, but the characters didn’t resonate with me.

Thanks to Worthy Publishing and NetGalley for providing a free ebook for review. You can find out more about Brandy Vallance at her website.
http://www.brandyvallance.com/
Posted by Iola at 09:00