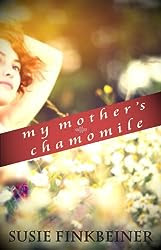 My Mother's Chamomile is written in the first person from two alternating points of view: Olga and Evelyn, Olga’s oldest granddaughter. It’s an unusual and ambitious choice (in that it’s hard to do well without constantly reminding the reader that it’s only a story), but it works. That’s a testament to the quality of the writing, and the strength of the individual character voices.

The family operate the only funeral parlour in a small town, which means they are an odd combination of essential and pariah. Essential, because it puts them at the centre of local tragedies, and pariahs, because most people are uncomfortable around death, which makes it to make friends, especially for Evelyn.

The first part of the book establishes the location and the relationships, but it takes a while for the actual plot to become apparent. In that respect, I’d classify My Mother's Chamomile as women’s fiction (and possibly a saga), because it’s more about the development and change of relationships than it is about actual events (although events, particularly deaths, do play a significant role—which shouldn’t be a surprise in a novel about a family of funeral directors).

This is a slight spoiler, so skip to the next paragraph if you don’t want to know. I’ve recently read The Fault in Our Stars, which has several support group scenes featuring the unintentionally hilarious Patrick (hilarious because he was someone no one would want to be). My Mother's Chamomile has a similar scene, with Debbie as the unintentionally funny character, particularly with her interactions with Stacy.

Overall, I enjoyed My Mother's Chamomile. It has strong characters, and a poignant plot which examined some of the more difficult aspects of family relationships. My one complaint was around the writing of the passage of time: in some cases, days or weeks passed between chapters, but this wasn’t immediately apparent.

Recommended for those looking for something a little different in terms of plot, and who don’t mind reading a novel that’s a little sad.


I don’t want everyone to remember me for the way I died.