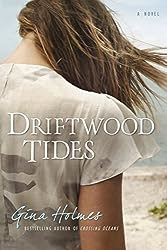 
Libby Slater is planning her wedding when a routine medical test reveals a secret from her past: that she’s the daughter of a stranger named Adele Davison, not Caroline and George Slater. Libby hasn’t seen her father since he left over twenty years ago, and her relationship with her mother has always been difficult. She determines to find Adele, if only to find a father to walk her down the aisle, but her attempt to reconnect with her birth family doesn’t go according to plan.

Holton Creary is a talented artist, but is also still grieving the loss of his wife in a car accident five years ago. His grief drove him to gin, and despite the help of his assistant, Tess, he’s about to go bankrupt. However, out of respect for his late wife, he grudgingly agrees to give Libby a summer internship … although he has no idea of the real reason she wants to work with him.

Driftwood Tides is the first Gina Holmes book I’ve read, and I was impressed. She’s an excellent writer, with the ability to create a cast of flawed but likeable characters (with the possible exception of the over-controlling Caroline), and to have them react in realistic ways to the challenges they are presented with. She has also managed to develop a plot with a strong Christian theme of forgiveness, yet keeping the Christian themes light and not at all preachy (if I had one complaint, it would be that I would have liked to have seen more of Libby spiritual development).

Driftwood Tides is more than a story of forgiveness. It’s the story of one man struggling to overcome grief with gin, of the woman who loves him enough to stick by him even when he barely acknowledges her existence, of another woman who changes both their lives, and of a young couple attempting to plan for a future together. It’s a plot with layers of complexity, and one with an element of unpredictability that turns it into something special.

Thanks to Tyndale House and NetGalley for providing a free ebook for review. You can find out more about Gina Holmes at her website, or at Novel Rocket, the website for writers.
Posted by Iola at 09:00