Veil of Secrets by Shannon Ethridge and Kathryn Mackel

Out of the Christian Rut 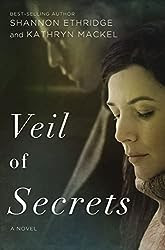 Melanie and Will Connors are the perfect power couple. Will is the chief campaign strategist for a rising presidential candidate; Melanie is a prominent advocate for protecting children in an over-sexualized culture. Their devotion to one another is admired, even envied.

But their marriage isn’t what it appears to be.

Will maintains an apartment in Washington, DC, and over the years his visits home have grown fewer and farther between. The long-distance marriage has enabled Melanie to avoid intimacy—and has only increased her shame about her secretive past. But then Will issues an ultimatum: We work on the marriage . . . or we work on the divorce.

The Connors commit to marriage counseling in the most brutal of environments—snowy New Hampshire, a tiny state that is first in the nation for presidential primaries and a prize to be won at any cost . . . and the price of victory keeps rising.

As Melanie sifts through the debris of her past, she obsesses over the fear that she hasn’t done enough to protect her teenage daughter. When Melanie sees her facing some of the same temptations, she knows she must intervene . . . but how can a woman with so many veiled secrets guide a
daughter honestly?

While the country struggles with threats to its integrity and security, Melanie can no longer ignore the dangers looming in her own world. She can never undo the mistakes of her youth, but perhaps she can still save her marriage and family—if she can surrender her guilt and learn to open herself to her husband once again.


There is a sameness about a lot of Christian novels. The characters are “good” Christians, whose main faults are emotional, not physical. Veil of Secrets is different. To be blunt, it’s about sex (not that there are any sex scenes. It’s more about the consequences of bad decisions around sex). These are characters who live in the real world, where otherwise intelligent people still sometimes do stupid things, and then have to work out how to live with the consequences. I liked that. Not that the characters did dumb things, but that the authors showed a realness not often seen in novels from Christian publishers.

Veil of Secrets was a more complex book than most I read. There were a lot of characters, and it probably took longer than it should have for me to work out who was related to whom and how. This might have been a bit easier if I’d read the first book in the series (To Know You), but reading the first book isn’t necessary for the story—Veil of Secrets can be read as a standalone novel.

The other layer of complexity in Veil of Secrets was the plot. As well as the obvious political background of the beginning of a presidential campaign, there was the issues plots: the “good Christian” career woman who finds herself pregnant after a one-night stand, and the broken marriage of a Christian couple. Shannon Ethridge has an extensive background in ministry around healthy sexuality and spirituality, and this comes through in the counselling scenes.

Recommended for mature audiences (meaning that a lot of Christian fiction appeals to a wide age group, from teens to grandparents. This won’t. The target reader is probably people like me: young professionals, married women, or parents of teens).